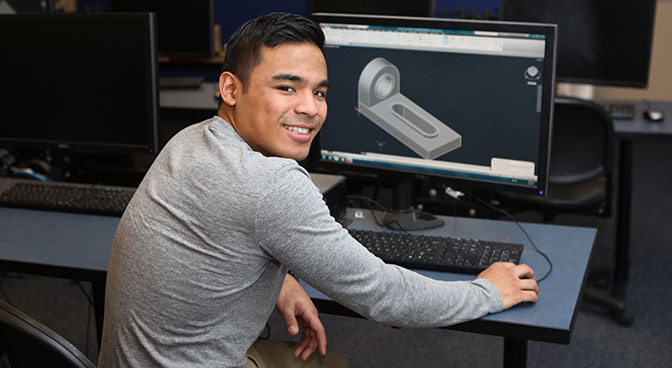 Anton Dela Fuente has just a few short months before he begins a $60,000-a-year job at Honda of America Mfg., Inc. He just bought himself a sports car, and will graduate debt-free on May 8 with an Associate of Applied Science in Electro-Mechanical Engineering.

Anton is part of the inaugural “class” of Next Generation multi-craft manufacturing support technicians at Columbus State—kids who have shot straight out of high school into an academic pipeline designed to replace retiring Honda technicians.

At Thomas Worthington High School, where Anton graduated in 2013, he was part of Project Lead the Way, studying Science, Technology, Engineering and Math (STEM) subjects that transferred directly into his degree program at Columbus State.

Anton’s parents brought him and his younger sister to the U.S. from the Philippines when he was only ten, and they moved to Worthington as Anton began his freshman year in high school. The engineering track offered at Thomas Worthington piqued his interest, and although no one else in his family works in the field, he began the Project Lead the Way program at age 14.

As seniors, Anton and two other Worthington students were recruited into the Next Generation multi-craft manufacturing program to study electro-mechanical engineering at Columbus State. After only two semesters in college, he went to work three days a week at Honda earning $18 an hour, while continuing his studies full-time, two days a week.

Paired with a soon-to-retire mentor at Honda, he learned to maintain and repair the robotics that operate the quality control process in a plant that churns out one Honda vehicle every 60 seconds.

Attending college full time while working second shift at the fast-paced Honda plant has been a grueling schedule, says Anton, but very worth it. Although he’ll soon be working fulltime, he already has plans to continue his education for a bachelor’s degree in engineering from Miami University Middletown, another partner in the Next Generation grant.

So as Anton attends his final Columbus State classes in preparation for his graduation, his Honda mentor—who has become a good friend—prepares for his retirement party.

“We took a tour of the plant together the other day to say goodbye to all his friends he has there after 29 years on the job,” Anton says. The young Honda technician says he will miss his mentor, but he feels ready to join the “next generation” at Honda and work hard to fill his shoes!