Spring Semester 2021: During January 18-23 ALL classes will accessed online even if they are listed with Partial In-Person or Full-In Person meeting times. More Info

Mid-Ohio Market at Columbus State marks one year of success 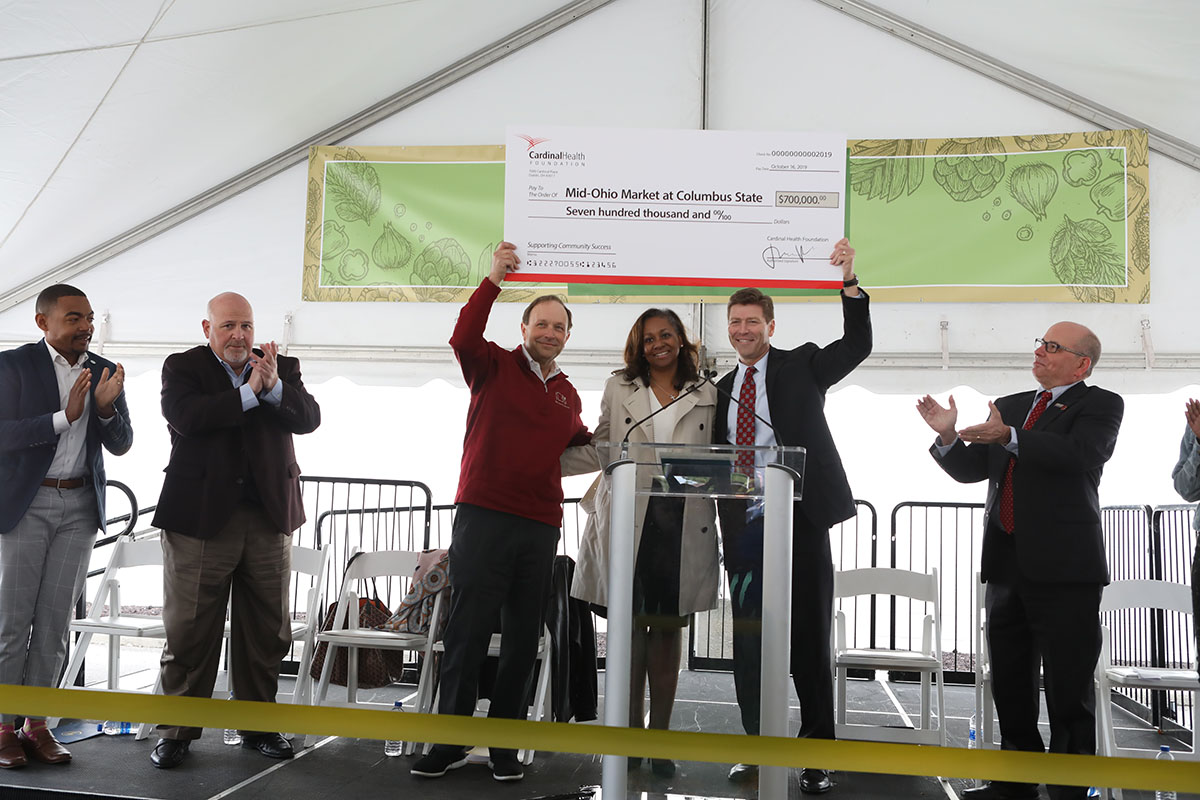 Pictured above: As others look on, Matt Habash, Mid-Ohio Food Collective, left; Kathryne Reeves, Cardinal Health Foundation Board, center; and Columbus State President David Harrison, right; hold up the $700,000 check at the dedication of the Mid-Ohio Market at Columbus State on October 15, 2019.

October marks the one-year anniversary of the Mid-Ohio Market at Columbus State, and it has exceeded expectations. The partnership between the College and the Mid-Ohio Food Collective was designed to address food insecurity for students and other area residents.

The Market is housed in a converted 2,450-square-foot former maintenance equipment garage at 400 Grove Street on the College’s Columbus Campus. It is supported by a $700,000 Cardinal Health Foundation grant. It was dedicated on October 15, 2019. In addition, Kroger and Wasserstrom provided in-kind support of essential equipment that helped establish the facility

It has now become a source of nutritious foods for students who are struggling to provide meals for themselves and their families. The service allows them to more fully concentrate on their education without worrying about consistent access to fresh produce and other staples, while also serving the community at large. The need has been even more pronounced this year as the country has dealt with the coronavirus pandemic.

To embrace social distancing guidelines during the pandemic, the Market began curbside pickup. “At a time when people feel powerless, to have this one moment that we can hopefully change things for the better, that definitely gives you a sense of purpose,” says Matthew Austin, manager at Mid-Ohio Market. It’s the moment where a child holds up a piece of paper to the window that says, ‘thank you,’ and those moments really do keep you grounded around our mission and what we’ve been able to accomplish.”

The Mid-Ohio Market at Columbus State is open Mondays and Thursdays from 11 a.m.-4 p.m. and Wednesdays from 3-7 p.m.