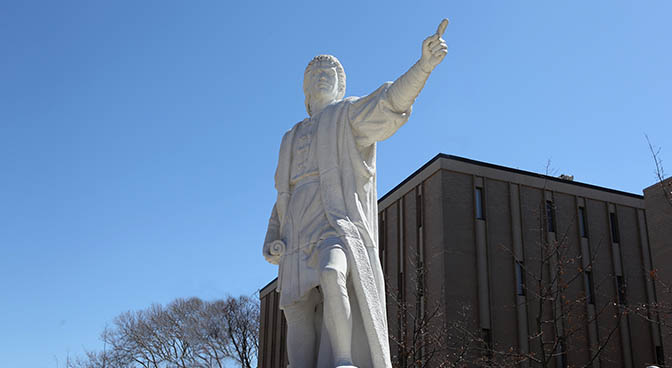 Columbus State Community College will dismantle and store the Christopher Columbus statue that has been displayed on the College’s downtown Columbus campus since 1988.

The College issued a message to faculty, staff and students today announcing and explaining the decision, which follows in full.

“In taking this action, we are being mindful of societal change and forward movement,” said Columbus State Board of Trustees President Anthony Joseph. “We do not seek to erase history, but to make an intentional shift in what we visibly honor and celebrate as an institution. This is the first of many steps in what will be a lengthy journey as the College seeks to build on and improve our ongoing efforts toward broadened diversity and inclusion.”

“The removal of the Christopher Columbus statue is a symbolic gesture of our commitment to our College and in our community to continue and accelerate the fight against systemic racism,” said Columbus State President David Harrison. “Recent events, including the senseless deaths of African-Americans and the resulting anguish across the nation, compelled us to act on a years-long internal dialogue about the statue and the message it sends in our community. This inflection point will inform College policy and action both now and for years to come.”

The College has committed to completing the removal of the statue within the next two weeks. It will begin an exploration process for a new art installation at the statue location.

“Statues are designed to celebrate our past, provide meaning to our present, and direct our future,” said Reuel Barksdale, a professor at Columbus State. “Nearly twenty-five years ago, my arrival to the faculty of Columbus State included an orientation which described the statue in the center of our campus as a celebration of exploration and the never-ending desire to become what we had yet to become. The removal of this statue declares that this institution has in fact moved closer to becoming what we have yet to become.”

I am writing to inform you that a plan is in place to remove the Christopher Columbus statue from our Columbus campus as soon as possible. Originally created by sculptor Alfred Solani in 1959, the statue was first installed in an Illinois park, and was moved to its current location in 1988. Physical details and logistics for the removal are still being planned, but we expect the statue to be removed and placed in storage in the next two weeks. This decision did not emerge solely in the wake of the senseless murders of George Floyd, Breonna Taylor, Tony McDade, and Ahmaud Arbery but was a years-long dialogue out of concern and support for students of color who have been harmed and traumatized by systemic racism. This effort was led by many dedicated students, faculty, and staff.

As an institution of higher education with a specific mission to foster critical thinking and service to its community and student population, Columbus State has a unique opportunity and duty to address systemic racism on our campuses. The collegiate setting is often where students begin to refine their understanding of history and the world around them. Our students contributed their voices to this discourse around systemic racism, reinforcing the conclusion that the Christopher Columbus statue is not consistent with the values and mission of Columbus State. How we choose to memorialize or celebrate our history is always the result of choices and is both dynamic and evolving as we are inclusive of more voices.

Our students, community, faculty, and staff have consistently and patiently asked for the removal of the statue. We are listening. We will continue to grow as an institution that educates and inspires not only in the classroom but in every aspect of what we present to the community we serve. We commit to facilitate these difficult conversations and thoughtfully assess our present and future with an eye towards transparency, diversity, equity, and inclusion.

Every step of societal progress should have happened sooner, and the removal of the statue is no exception. We will use this opportunity to re-envision our campus, and engage our community, students, faculty, and staff in developing spaces that promote inclusive learning for all. The removal of the Christopher Columbus statue is not the end, but rather the continuation of more discussions and changes to come. Removing the statue will not remedy all of our challenges, but it is a purposeful first step as we commit ourselves fully to fighting systemic racism and ensuring equal opportunity for every member of our community.