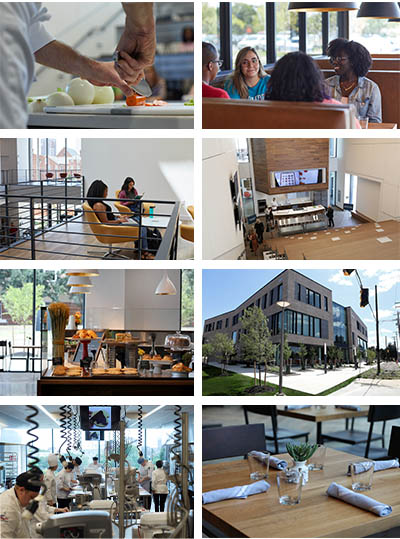 Opened in August 2019, Mitchell Hall is the new home of Columbus State's School of Hospitality Management and Culinary Arts. The building is named after renowned restaurateur Cameron Mitchell of Cameron Mitchell Restaurants’ (CMR) who generously took the lead on the philanthropic campaign and provided a $2.5 million gift in support of the project.

Features of the 80,000-square-foot, three-floor facility include:

With the opening of Degrees and Blend, Columbus State is seeking food service professionals to help run both retail spaces, which are both open to the public. It's a great opportunity to work with our students and culinary team to create a great experience for our guests while earning a competitive wage.

The College adheres to all the relevant requirements of the Ohio Public Records Laws. Every effort will be made to keep inquiries and applicant materials confidential, to the extent permissible by law.

A Commitment to Affordability

Thanks to a low annual tuition and financial aid options, 76 percent of our students take on zero student loan debt. Many go on to one of our nine regional university partners who offer guaranteed admission and credit transfer to Columbus State graduates.

The Most Diverse College in Central Ohio

We serve students from all backgrounds and seek to cultivate an equally diverse workforce.

A Big City with Small-Town Approachability

Visitors wander the galleries at the Columbus Museum of Art.

The Hills Market is a locally owned specialty grocery store within walking distance of the Columbus Campus.

Huntington Park in the Arena District is home to the Columbus Clippers baseball team.

The Short North Arts District is a popular dining and entertainment destination.

The Columbus Metropolitan Library was named National Library of the Year in 2010.