Staff Employees of the Month 2021

Full and part-time staff employees of the month for the year 2021. Click profile bar to see why they won. 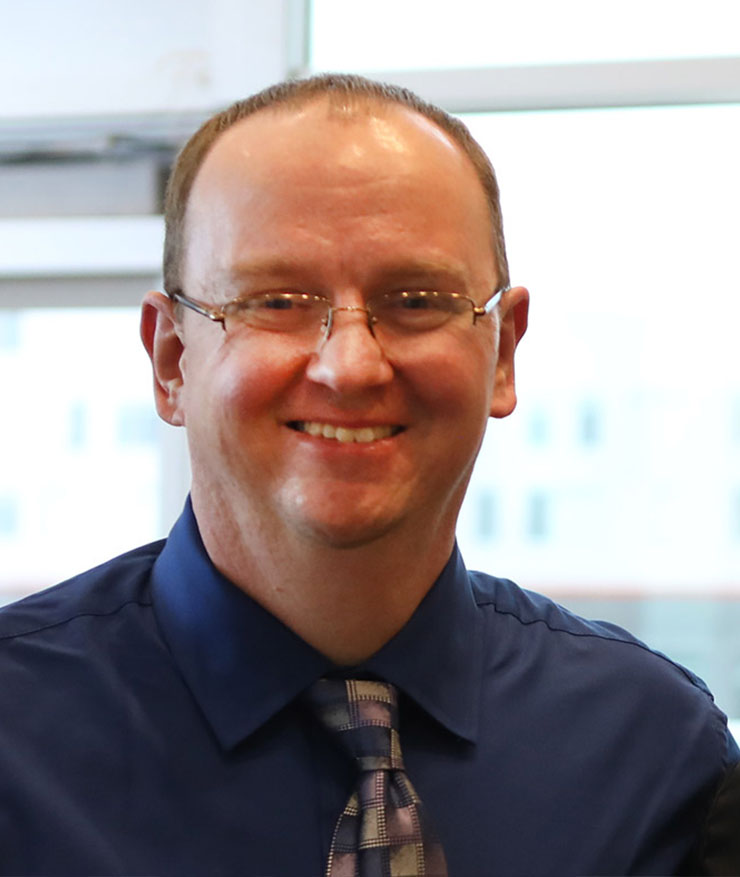 Currently, as access coordinator, Williams provides swipe card access to all faculty and staff. When COVID-19 began to impact the College, it altered access points, which have changed from semester-to-semester and even week-to-week. Police Lieutenant Tracy Anderson nominated Williams. “Billy was tasked with coming up with the best solution on how to handle room and building access in a way that reduced the overall touch-points,” said Anderson. “This is a complete re-imaging of how we typically provide access and he has been extremely flexible in helping institute the new changes.” 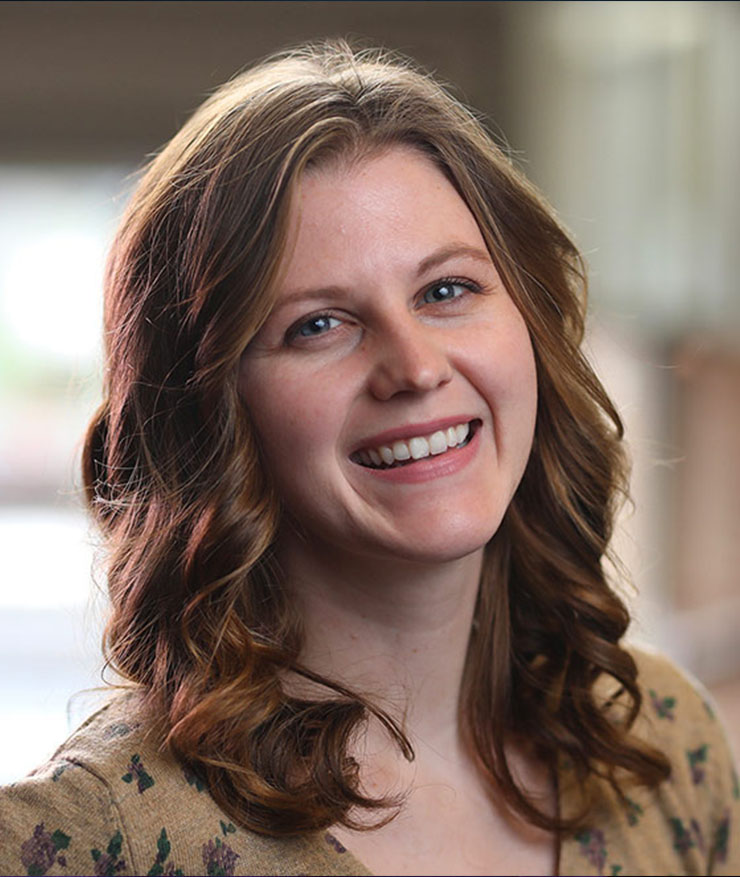 Described as a team player and collaborator, the latest Staff Employee of the Month works in the Admissions Department. Jessica Eberly was named the honoree at last week’s First Wednesday event. She began as a part-time employee in 2015 and transitioned to full-time in 2019.

Phyllis “Dr. Phyl” Gorman, director of Professional Development & Retention (PDR), nominated Eberly for “stepping up” in the early days of the pandemic to provide leadership to a group of employees that had been displaced from their regular on-campus duties to join Eberly’s team in expanding telephone outreach to potential students. In her nomination, Gorman highlighted Eberly’s coordination with PDR and IT along with her work creating schedules and assignments, and her problem-solving abilities. Gorman said, “As a consequence of her work, thousands of additional home contacts were facilitated by the expanded team, who encouraged students, and greatly enhanced the College’s capacity to support and expand enrollment.”

A coordinator in the Columbus State Police Department who’s been at the College since 2017 was named the latest Staff Employee of the Month. 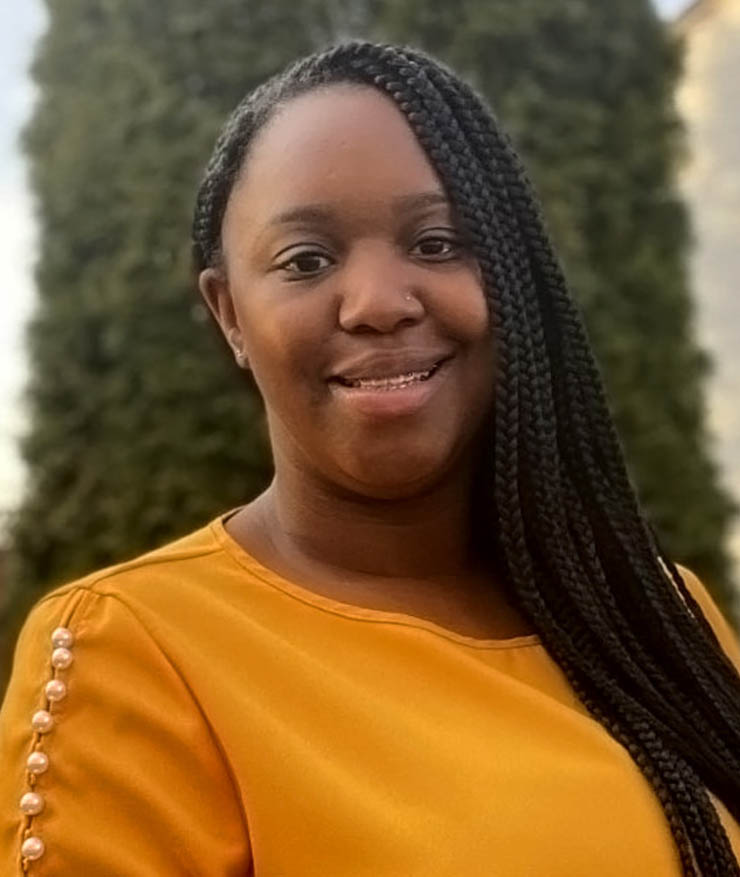 Sibhan Courts, Clery and Support Services coordinator, was announced as the recipient of the monthly award by her supervisor, Lt. Tracy Anderson. She was nominated by Lt. Doug Willard.

In his nomination form, Willard says, “Sibhan has helped craft, update and maintain hundreds of police department policies and procedures. Her efforts have contributed directly to the department achieving state accreditation through the Ohio Office of Criminal Justice Services, aligning the department with national best practices, and moving us closer to national accreditation through the Commission on Accreditation for Law Enforcement Agencies.” Courts actively serve in community engagement to support college initiatives and student success. She also teaches CPR and has been working closely to asset elderly residents in the community since the pandemic began. 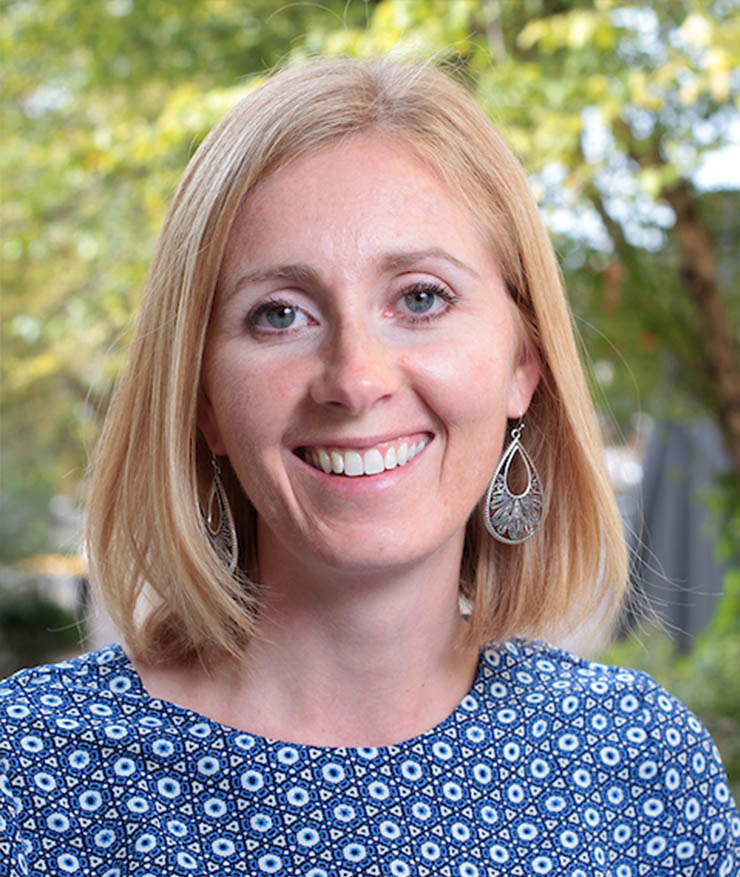 A program coordinator in Enrollment Management and Student Services was named the latest Staff Employee of the Month at last week’s First Wednesday meeting. Shelly Casbarro was the recipient. She began working at the College as an adjunct professor in 2008. Casbarro transitioned into a part-time roll two years later and became a full-time employee in 2019.

She was nominated by Amanda Talbott, program coordinator in the Center for Advising Support and Exploration, and Sarah Baker, executive assistant in the Office of the President. In the nomination form, Baker said, “Shelley is an innovative thinker and inspiring campus leader exemplifying the beneficial power of possessing a growth mindset. Talbott, when she was new to her full-time role, said, “Shelley connected me with staff in other departments that would help support me in my role and made me aware of programs that would allow me to do my job in a more productive and timely manner.

The latest Staff Employee of the Month is a buyer for the Bookstore who has been with the College for 15 years. 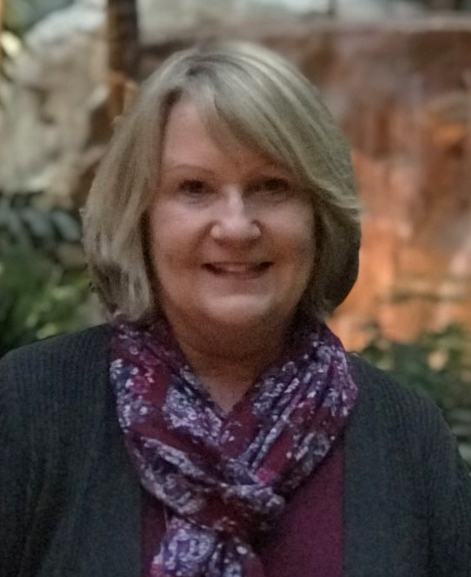 Sandy Zeller was recognized with the honor at last week’s First Wednesday meeting. She was nominated by her supervisor and director of the Bookstore, Stacey Mulinex.

In her nomination form, Mulinex provided three specific examples of Zeller going above and beyond expectations. “After Spring Semester 2020 graduation was canceled, Sandy spearheaded a special graduation project and led a small team of volunteers on-site to assemble more than 1,000 graduation gift boxes to ship to graduating students.”

Mulinex also says Zeller has consistently helped IT during the pandemic to meet the needs of an online learning and work environment, and she partnered with Professional Development & Retention to source service award gifts and shipped 450 award packages recognizing employees. 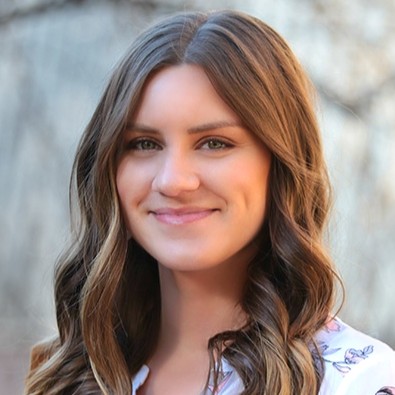 Allen was nominated by her supervisor, JoYin Tang. In the nomination, Tang said, “Candace (goes above and beyond) by working as a student club advisor. She knows just when to step in and give advice while also letting students run the club as independently as possible.” Tang added that Allen brings enthusiasm and positive energy to our College, which is apparent through her willingness to help students, their families, and other colleagues whenever possible.

The latest Staff Employee of the Month is a technician with Academic Technology Services who has been with the College for more than three years. 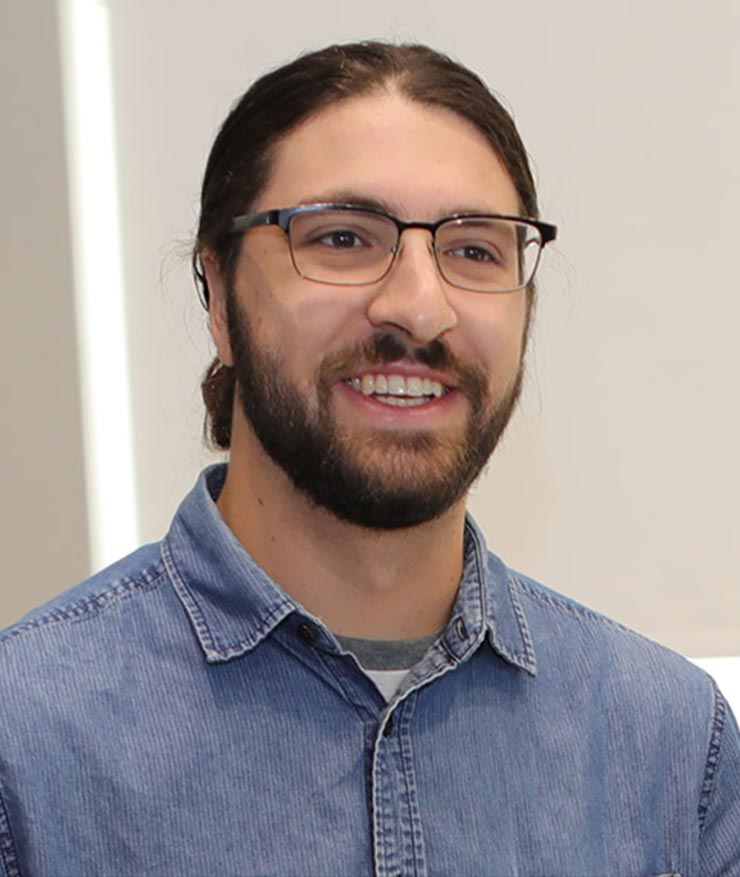 Nick Malpezzi was nominated by Scott Laslo, an associate professor in Design, Construction & Trades. In his nomination letter, Laslo said, “Nick (would) stay that extra five minutes and make sure you had everything you needed, and it was working to your satisfaction. The welding labs would not be working the way they are had it not been for Nick and his willingness to make sure the lab was set up correctly.”

The latest Staff Employee of the Month has been making a difference with students, staff, and outside partners. 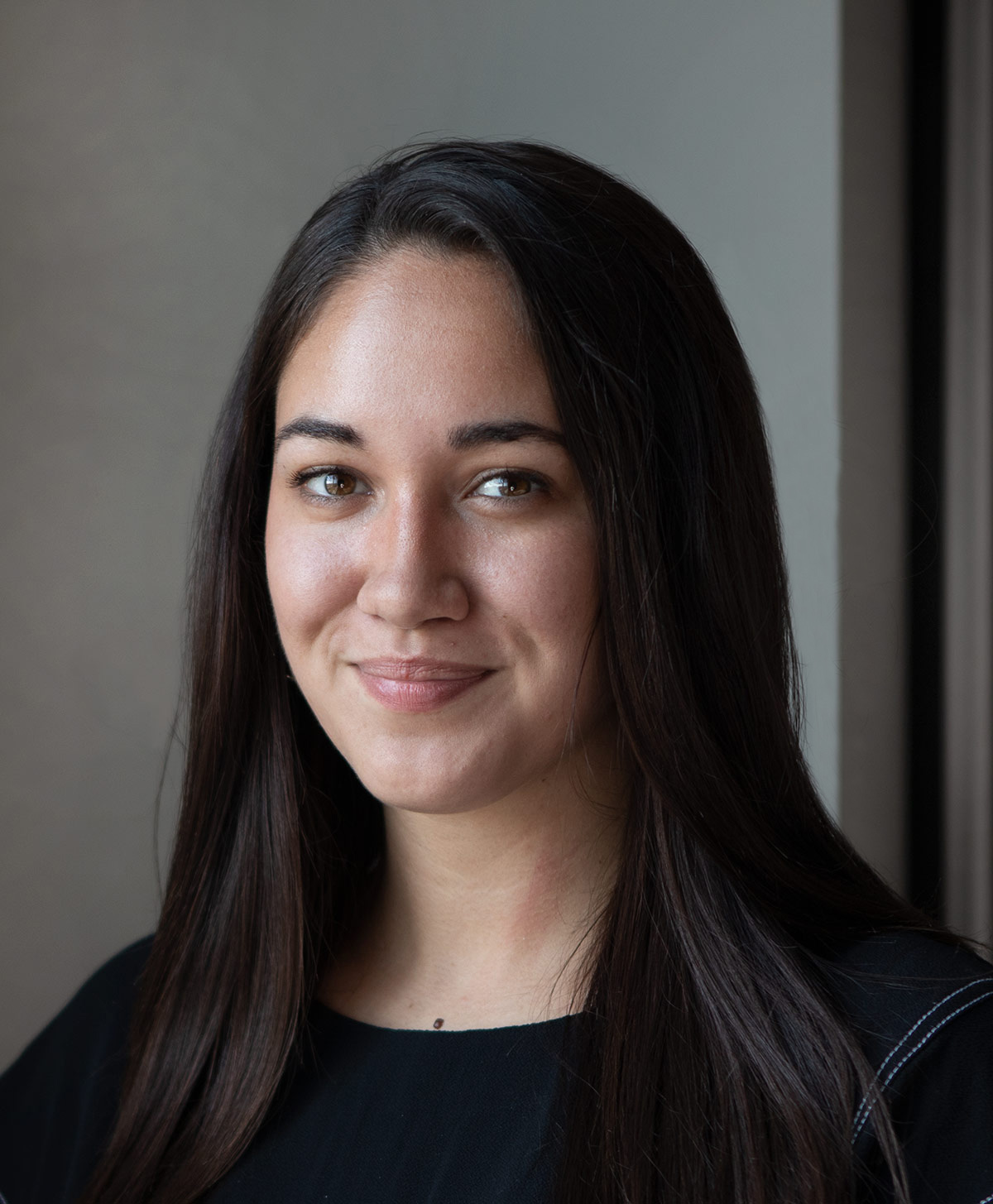 Kaylor Ramey, the outreach coordinator for Employer Engagement and Experiential Learning (EEEL), was presented with the award at last week’s First Wednesday meeting in the WD Conference Center.

Ramey arrived at the College in January 2020 and was nominated by Ellen Neutzling, Partnerships and Programs supervisor. “She has an exceptional ability to manage work and deliver results,” said Neutzling in her nomination form. “Kaylor volunteered and led a team of students to execute a project for the AACC and NSF Community College Innovation Challenge.” (That team was selected as a top 10 in the nation and competed in the Innovation Challenge national finals.)

Scott Wegeng, EEEL director and Ramey’s supervisor, says, “Kaylor has caught the eye of top leaders at Nationwide with her attention to details and excellence in creating deliverable for the Nationwide Financial Services professional Apprenticeship program.”

A Conference Center employee who has been at the College since 2016 was named the new Staff Employee of the Month at last weeks’ First Wednesday. 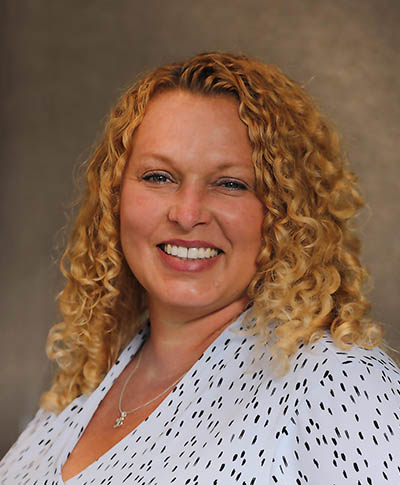 Lori Gage, who is the coordinator at the Conference Center, was nominated by her colleagues on the Conference & Event Services team: Patricia Huston, Greg Hetterscheidt, Patty Gabrenya, Bri Wears, Kyle Strohecker, and Ben Kalb.

Gage recently nominated a Columbus State event – Diversity in Hospitality: Black Chefs Speak Out – for a national award. The event subsequently won the award, which was part of the Association of Collegiate Conference & Event Directors International conference.

Huston’s nomination letter said, “(Gage highlighted) the need for diversity and inclusion in events and motivated our department to adjust and improve our DEI efforts. Lori often goes above and beyond in her commitment to excellence in her role at Columbus State.”

An employee in New Student Programs was named the new Staff Employee of the Month at last week’s First Wednesday. 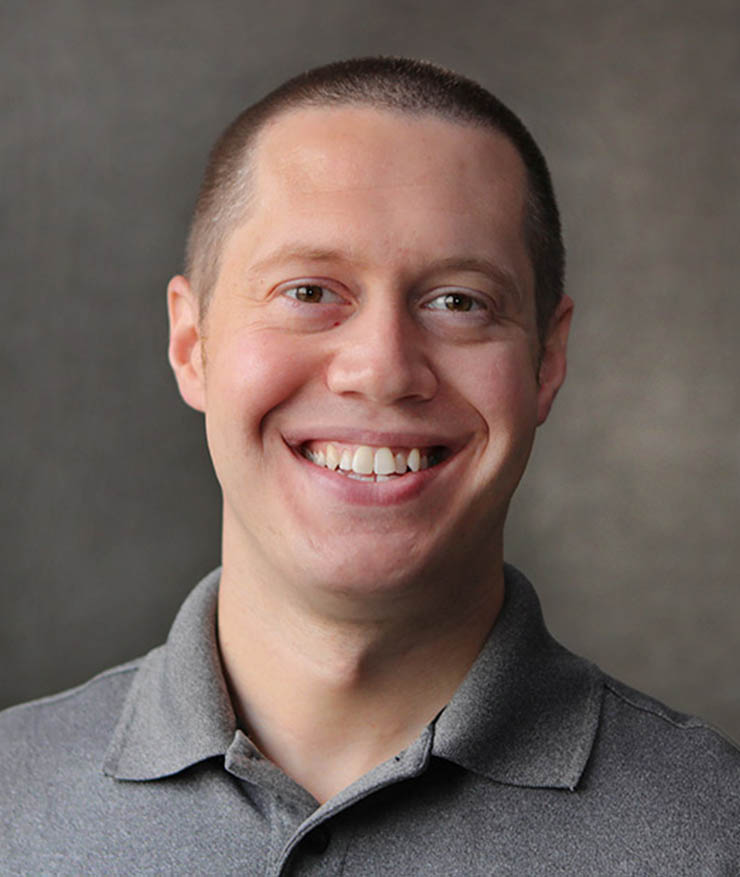 Geoff Bauer, a program coordinator in New Student Programs, has been with Columbus State since 2019.

In their nomination form, Jessica Eberly and Allison Franz said that Bauer served as a lead on crucial initiatives when the College went remote. “Geoff worked to redesign the entire orientation experience for our incoming new students to serve them in a virtual environment,” they said. “He worked with IT to make sure that even though students missed out on the in-person setting, they did not miss out on the content or connections students would need to be successful here.”

Bauer’s supervisor, Brittany Barrett, assistant director of New Student Progams, says, “He tackles all tasks and programming with logic and genuine care for students, their experiences, and their well-being.”

A designer in Partnerships & Programs was named the latest Staff Employee of the Month at last week’s First Wednesday. 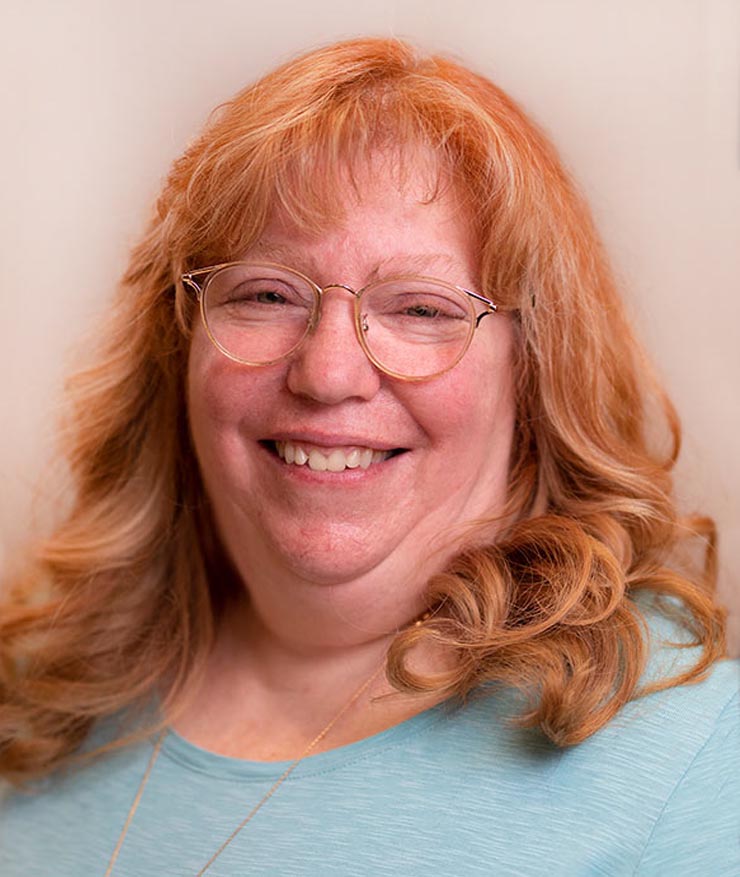 Elicia Flom was nominated by multiple people in several departments.

Flom’s supervisor, Nancy Case, dean of Partnerships & Programs, made the announcement. She said, “Elicia, you inspire us. You make us better. And we are grateful for your work.” In nominating Flom, Tara Sheffer, project manager, said, “Flom has been influential in countless projects over the past year, including the CREST training project and the launch of three new non-credit offerings.

Michell Ward, project manager, said, “It’s not just that Elicia is a hard worker; she brings curiosity and joy to her work. She truly loves instructional design, learning new subjects, and creating courses from the ground up.

2021 Staff Employees of the Month

Staff employees can be nominated for Staff Employee of the Month for making a difference to Columbus State, going above and beyond expectations, excelling as a team player, or striving to bring out the Columbus State “spirit” in others. To nominate a colleague, click on the forms below.

2020 Staff Empoyee of the Month page

2019 Staff Employee of the Month page

2018 Staff Employee of the Month page